Who Was Saint Denys?

The life of Saint Denys

Denys was born in Italy early in the 3rd century, probably about 210 AD. Nothing is definitely known about the date or place of his birth, or his early life.

He became a priest and in 245 Fabian, the Bishop of Rome, consecrated him and six others as missionary bishops to work in Gaul (France) where many Christians had suffered terribly during the persecutions set in motion by the Roman Emperor Decius.

Denys arrived in Paris as its first bishop with two companions, the priest Rusticus and the deacon Eleutherius. They settled on an island in the Seine and built a church there. From there they went out preaching the gospel. The local pagan leaders incited the people to force the Roman governor, Fescenninus, to stop their teaching. When Denys and his companions refused to stop, they were seized, tortured and beheaded on the hill of martyrs’ Montmartre on October 9th 258.

The veneration of Saint Denys

A legend says that after martyrdom Denys carried his head the six miles to the place where he was to be buried – but we don’t have to believe that! 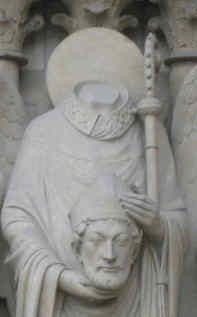 A pious Christian woman, Catulla, buried them on the site of the present Basilica of St Denys in northern Paris and built a small shrine on the site. Later a Benedictine monastery was established there. In 475 Genevieve built a chapel on the spot on Montmartre where the three were executed.

By the 7th century the veneration of St Denys had become more and more a national devotion. Early in the 12th century the Benedictine abbot Suger oversaw the construction of the basilica on the site of St Denys’ grave. It was the world’s first Gothic cathedral and was the inspiration for Chartres cathedral.

Almost every French king was laid to rest there, though all their graves were looted in the French Revolution.

In memory of his son, Prince William, who drowned in the “White Ship” in the English Channel in 1120, King Henry I of England established a priory in Southampton in 1124. The Priory of St Denys was an Augustinian priory staffed by Canons Regular, that is, not by monks but by priests who lived in community under a Rule of Life (regula) but worked in the local community. Some took care of the church at Chilworth which, because of the link with the Priory, was dedicated to St Denys in 1224.

To the present day