St Denys Church is the proud owner of a fine organ, part of which (the Great Organ) may be one of the oldest in Hampshire. 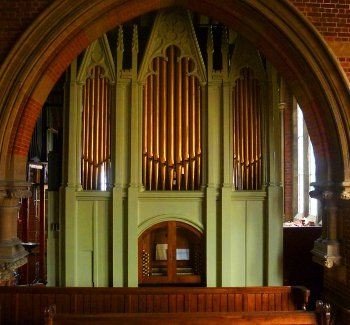 In 1756 the Organ was given to the church of St Maurice’s Winchester by the Marquis of Carnarvon, afterwards 3rd Duke of Chandos. It was described as “a complete organ with a double set of keys and everything proper useful, necessary and ornamental thereto”.  It was further described in 1772 as a “beautiful instrument”.

The organ was examined in 1829 by Mr Henry Leffler an Organ enthusiast who believed that the great organ was from one built by “Father Smith”, in about 1690.  It is thought the swell organ was added later by Byfield in the later 18th century and that Avery also undertook work on the instrument. It is currently not clear where the organ originated, though the Marquis of Carnarvon inherited Avington Park near Winchester in 1751 and the house had been used in the late 17th century by Charles II and Nell Gywn.  It is possible that Avington park is the origin of the instrument.  However, other research has suggested it might be one of the two instruments known to have existed at Cannons, the house of the first Duke of Chandos, an instrument that Handel may well have played during his friendship with the Duke, the other is now at Holy Trinity, Gosport.

In 1842  the organ was rebuilt by Blyth of Isleworth and a pedal organ was provided along with the present gothic case.

The organ was again partially rebuilt in 1868 by Hill and Sons, again in 1884 by J Walker and then by Burton of Winchester in 1902.

Osmonds of Taunton rebuilt the instrument in 1957 when it was moved from St Maurice to St Thomas Church.

In 1970 further work was undertaken in its move to St Denys.