Yesterday (Friday) the new church of St Denys was consecrated by the Bishop of Mauritius. This Episcopal structure has been built in the early English style of architecture from designs furnished by Mr Gilbert Scott of London, and the work has been most satisfactorily carried out by Mr Futcher of Salisbury. The church is constructed of red brick with bath stone dressings, and the windows admit an abundance of light. At present there is a nave with chancel at the eastern end of circular form, a north aisle and north chancel, and doubtless the structure will remain in this condition till its enlargement is absolutely necessary, when a south aisle and chancel will be added; and the building thus completed will form one of the most pleasing specimens in the district of ecclesiastical architecture.

The Contract for the work as it exists at present was about £5,000. The church we understand (but on this point have received no positive information) will accommodate some 700 persons. The pews which are of stained deal are roomy, and kneeling boards are placed within them. The roof too is of stained wood, and its appearance is ornamental. The principals supporting the roof rest on brackets carved with designs characteristic to the style of architecture. The mouldings around the arches are terminated at the spring of the arch by heads. With regard to the widows, they are plain quarry lights but are arcaded. The doors are also arcaded, and the western and principal entrance is of very neat design, while the top arch is ornamented with dog tooth moulding. 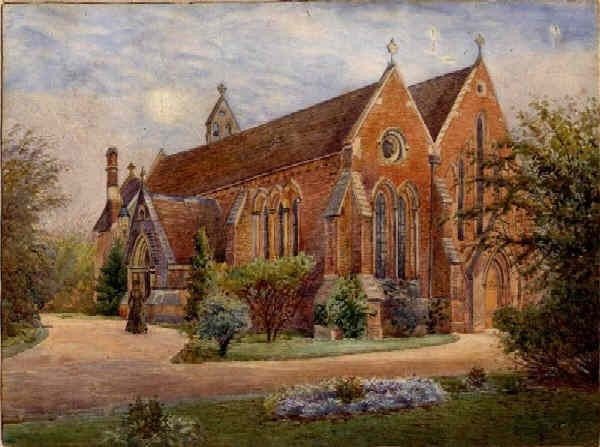 There can be no doubt that the church is a great desideratum for this densely populated locality, the nearest place of worship of the same kind being at Highfield. An anonymous donor, anxious to secure church accommodation for the residents of the district generously offered to contribute £3,400 if an additional £3,000 could be raised. £1,000 more is still required, and one lady has so interested herself in the matter that she with great liberality has put her hand down for £200 on condition that £800 more is subscribed by the anniversary of the consecration, the 3rd of July 1869. The endowerment (of the living) from the time of consecration is £150.00 per annum—out of the Rectorial resources of St Mary’s; but the church is a district church of South Stoneham parish.

At 11 O’clock yesterday morning the Bishop of Mauritius , was received at the western entrance by the incumbent and a number of clergy, the church committee and the church wardens (Mr H. P. Buchan and Mr Sheriff Furber), and processed at once to the communion table, here a petition was presented asking for him to consecrate the church—the Bishop and clergy walked down one of the aisles and read in alternate verses the 24th psalm, after which the Bishop repeated the prayers used upon such occasions.

The ordinary form of morning service was then, the first part being read by the Rev T D Bolton, the first lesson by Rev W Sealey and the second lesson by the Rev R C Callender. The Rev F E Wigram conducted the Litany, and the consecration portions of the service were performed exclusively by the Bishop, as whose chaplain the Rev Mark Cooper, the Rector of St Mary’s officiated.

The Rev W D Harrison of South Stoneham, read the epistle. The Bishop preached a plain practical sermon from the first verse of the psalm—I was glad when they Said unto me let us go into the house of the Lord; he quoted instances in scripture of the importance of the public worship of God. We read early in Genesis that the children of Seth began to call upon the name of the Lord; Noah, too engaged in the public worship of God; and the grandest feature in Abraham’s life was the repeated statement—“ he built an altar unto the Lord” Jacob was also referred to in support of public worship, and also the liberality of the children of Israel in the guidelines with regard to the Tabernacle.

The dedication of the Temple by Solomon, and the restoration of the Temple were aptly quoted—“ and forsake not the assembling of yourselves together as the manner of some is, and so much the more as ye see the day approaching”. The Bishop then proceeded to show why our meetings in the house of God ought to be occasions of gladness, one reason of which was that of realising our spiritual privileges, and its tending to remind us that we had something better and higher, and nobler within us than this world would satisfy.

In concluding his discourse he said it was his duty to impress upon those present the need that existed of sustaining increased effort and zeal to meet the generous donations through which the building of the house of God was first enterprised. The £3,400 had been given on condition that £3,000 more was raised to complete the church and build the schools, which it had not yet, it would seem, been met by the full equivalent. He trusted one of the results of the service that day would be to kindle their zeal in this Holy cause, and might much blessing rest on those who in this way continued their services for the glory of God and the good of his church.

Finally he said they might be assured of this, that in proportion to the simplicity of our faith in a crucified saviour, as a mediator, advocate, intercessor, prophet, priest and king—to whom death and resurrection we looked back as the ground of all our trust in God’s mercy and to whose caring again we looked forward as the ground of all our hopes in God’s promises—in proportion to this would be our experience of the blessings of worshippers in his name and our appreciation of the truth of the words of the Psalmist “ I was glad when they said un to me let us go into the house of the Lord”.

At the termination of the service a collection was made and the sum of £65.4s.4d was raised.

A second service was held in the evening when the sermon was preached by the Rev A C Blunt of Millbrook.