The Saint Denys district of Southampton is named after the Augustinian Priory, founded in 1127 of which little now remains.

The present church was built on a site close to the ancient priory by a leading architect in the gothic revival, Sir George Gilbert Scott, (1811-1878) whose other projects included the St Pancras Railway Station in London. 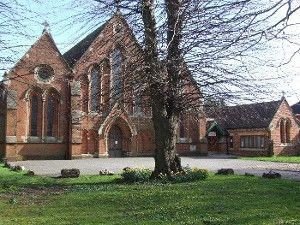 St Denys Church is described by David Lloyd in “Hampshire and the Isle of Wight” (Pevsner, N. and Lloyd, D.) 1965) as:

The Nave, Chancel and North Aisle were built in 1867 and the South Aisle added in 1889. The Vestry (now demolished) was built in 1896 and partially re-erected to facilitate the recent development of the Church Centre.
Before the erection of this Church Centre in 1997 the site included a church hall that was built in 1910. This, together with a pre-fabricated meetings room building, was demolished in 1996 and part of the released site sold to a housing authority. 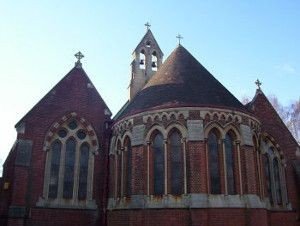 The new Church Centre incorporates material from the former Hall, including its timber trusses, vestry (including a reconstructed Vestry gable elevation) and windows from the Church/Vestry link corridor. These line the Church Centre corridor alongside the inner garden court.

The main building is constructed in red brick with interior and exterior stone dressings in a warm brown limestone that originates from Bath. 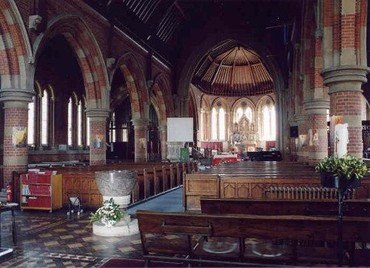 Interior of the Church.

Fragments of the Augustinian Priory of St Denys which was sited nearby (near the north-east side of the junction between Priory Road and Priory Close) survive in the church. These include encaustic tiles from the Priory pavement and a stone coffin, said to date from the 12th to 13th century.